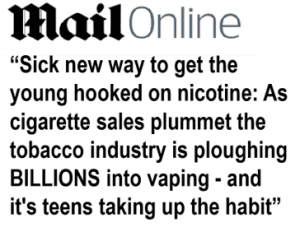 We were surprised to see images of our products featured in a recent Daily Mail article. Sadly though, the article turned out to be another scaremongering piece about vaping.

In our post “Facts About Vaping – Who Can You Trust?”, we urged readers to only go to official sources for their information on vaping. The reason is clear: with the prevalence of sensationalist reporting and clickbait articles, it’s easy to let emotion take over from reality.

Today, we address some of our concerns and set the record straight once more.

To be begin with, there is nothing new about vaping. The vaping industry really began to gain traction in the UK in the early 2000s. And yes, the tobacco industry is investing a great deal of resources into vaping. This is a good thing as vaping is a far safer alternative to smoking according to several reliable official bodies, including:

“An estimated 2.9 million adults in Great Britain currently use e-cigarettes and of these, 1.5 million people have completely stopped smoking cigarettes. They carry a fraction of the risk of cigarettes and can be particularly effective when combined with extra quitting support.”

“Evidence so far indicates that e-cigarettes are far less harmful than smoking as they don’t contain tobacco or involve combustion. There is no smoke, tar or carbon monoxide, and studies looking at key toxicants have generally found much lower levels than in cigarettes.”

“Vaping poses only a small fraction of the risks of smoking and switching completely from smoking to vaping conveys substantial health benefits.”

and the Royal College of Physicians (RCP).

“Although it is not possible to estimate the long-term health risks associated with e-cigarettes precisely, the available data suggest that they are unlikely to exceed 5% of those associated with smoked tobacco products, and may well be substantially lower than this figure.”

In fact, vaping is far better for you than most of the things many people do on a daily basis. Below are some straightforward facts to illustrate. The figures are all from 2016 as the information on deaths attributed to smoking in the UK from 2017 onwards were not yet available at the time of writing.

7,327 alcohol-specific deaths in the UK in 2016 (Office for National Statistics)

0 deaths attributed to vaping in the UK in 2016

While we understand news outlets want readers of their content, clickbait preying on the fears of health issues and so-called “teen epidemics” only serve to confuse the public. A quick Google search for “daily mail online vaping” will reveal an inconsistent message for readers. While one article on 28th December 2018 has the headline:

, they are followed by an article on 30th January 2019 with the headline:

It seems a lot changed in just one month!

Moreover, in the Daily Mail’s most recent article published on 26th April 2019 on the topic of vaping it states:

“E-cigs are also a possible ‘gateway’ to conventional cigarettes.”

But on 1st April 2019, a Daily Mail article had the headline:

On a serious note, we do urge the press to stop confusing the public with regard to vaping as it could cost lives.

According to the Royal College of Physicians (RCP):

“E-cigarettes are not a gateway to smoking – in the UK, use of e-cigarettes is limited almost entirely to those who are already using, or have used, tobacco.”

If this kind of reporting continues, it could seriously impede efforts to reduce tobacco use in the UK and deter smokers from switching to vaping as a safer alternative. Professor John Newton, Director for Health Improvement at Public Health England (PHE) has said:

“Our new review reinforces the finding that vaping is a fraction of the risk of smoking, at least 95% less harmful, and of negligible risk to bystanders. Yet over half of smokers either falsely believe that vaping is as harmful as smoking or just don’t know.

It would be tragic if thousands of smokers who could quit with the help of an e-cigarette are being put off due to false fears about their safety.”

There is no “teen vaping epidemic”

We have addressed the sensationalist reporting of a “teen vaping epidemic” in our post “How to Discourage Teen Vaping”. Just a mild amount of research will quickly reveal this is just not true.

“In England and in Great Britain as a whole, experimentation with EC [e-cigarettes] has steadily increased in recent years. However, regular use remains low, with 1.7% of 11 to 18-year olds in Great Britain reporting at least weekly use in 2018.”

It goes on to say:

“Vaping continues to be associated with smoking. The proportion of young people who have never smoked who use EC [e-cigarettes] at least weekly remains very low (0.2% of 11 to 18-year olds in 2018).”

At just 1.7% of 11-18-year olds vaping at least weekly, teen vaping is hardly an epidemic in the UK. Furthermore, the evidence update states this change is likely due to the decrease in smoking among this age group.

While we would never condone vaping for anyone under 18, at least they are choosing an option which is 95% safer. In our article, we also discussed ways to discourage teenagers from vaping, including enforcing vape-free school grounds, ensuring vape products are only sold to over-18s as best as possible, and increasing education on the dangers of nicotine addiction. At the same time though, vaping shouldn’t be placed in the same category as tobacco to prevent teenagers from confusing the two.

Again, if you read our post on “Are Sweet E liquids Encouraging Children to Vape?”, you will see the answer is simply no. In the ASH 2018 survey, 2013 to 2018 saw only a slight increase in 11-18-year-olds experimenting with e-cigarettes and the use remains rare at just 2% of respondents and largely confined to those who currently or have previously smoked cigarettes. At the same time, the number of adult vapers has grown fourfold since 2012, mainly due to an increase in people quitting smoking. Also, in an article by Public Health England (PHE):

“What’s also interesting is that vaping is far from being a youth phenomenon as feared by many and almost entirely confined to those who have smoked.”

The article goes on to say that the peak age for vaping is actually 25-49.

So, while there has been a small increase in youth vaping since 2013, sweet e-liquids with appealing labels have, on the other hand, been on the market since the early days of the industry and have boomed in popularity. It’s just a fact that many adult vapers enjoy sweet e-liquids and as the bottles are placed on shelves, they need to be eye-catching for the adult customers.

Appeal to media outlets to refrain from health-related clickbait articles

We all know that publications across the world rely on advertisement revenue as their main source of profit, and as such, need readers to click through on their articles. However, scaremongering headlines on health issues only confuse the public and if they deter people switching from smoking to vaping, could cost lives and the country millions of pounds. This kind of clickbait article should be reserved to what Meghan Markle is wearing on any given day.

Is vaping a “sick new way to get teenagers hooked on nicotine”? Simply, no. It’s a way for adults to quit smoking, improve their quality of life, and increase their lifespan so they can continue to see their children grow up and learn from their teenage mistakes as we all do.

Do you think that vaping is a “Sick new way to get the young hooked on nicotine”? Let the community know what you think in the comments below.