COVID-19 UPDATE: We are fulfilling orders as normal.
GET IT Saturday, Apr 11 , ORDER IN NEXT 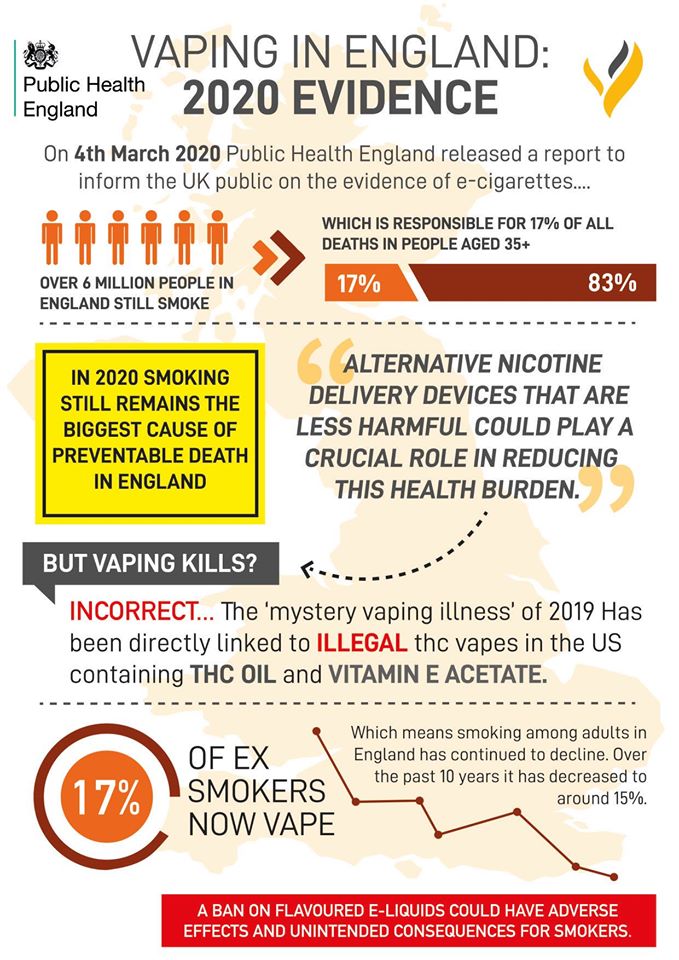 The new report from the Public Health England (PHE) was published today. The report focuses on what many of us would deem a simple question; is vaping more dangerous than smoking?

Alarmingly, PHE has found that over half of smokers believe that vaping products are equally or more harmful than smoking. This is despite all evidence from governing health authorities.

The PHEs sixth independent e-cigarette report which was commissioned from researchers at King’s College London was published today (4th of March 2020) alongside new advice on vaping in NHS mental health trusts.

The report focuses on a couple of important areas; young people and adults, people with mental health conditions, and pregnant women. Splitting smokers/vapers into these categories is vital to understand and further research into the health impacts of smoking verus vaping. Furthermore, the dangers verus the perceptions of vaping.

The perception that vaping is dangerous

There is now an increase in perception that vaping is equally or more dangerous than smoking. This is despite expect reviews from the UK and the US. Both governing health bodies conclude that using regulated nicotine vaping products is far less harmful than smoking.

To clarify on the expert reviews on vaping, we must stress that vaping is safer than smoking. However, under no circumstances should a lifelong non-smoker start vaping. Vaping was designed and continues to be a quitting smoking aid. Whilst vaping is much less harmful than smoking, it is not completely safe. The long-term impact of vaping will be unknown for some time. All current evidence, however, is pointing to at least 95% safer. This opinion falls in-line with the PHEs advice that smokers should convert to vaping and non-smokers should not vape.

Why do people think that vaping is more dangerous than smoking?

If you have been following our articles you will know that we have been reporting on the ‘Mysterious Vaping Illness’ in the US since it began in August 2019. We even put together a complete time-line of events. If you haven’t been keeping up with us, then here is a quick recap:

The ‘Mysterious Vaping Illness’ in the US – quick recap

In August 2019, the Centre for Disease Control starts to investigate into ‘vape related illnesses’. This continues with ‘vape related deaths’ starting to hit the headlines across the world. The scaremongering begins regardless of the fact that each of these investigated cases were found to be using THC. This was combined with vitamin E acetate, both of which are illegal in the UK. This continues with states and countries even going to the extreme measure of banning vaping. Then moves onto flavoured e liquid which is completely unrelated to the ‘vape related illnesses’.

Fast-forward to January 2020. The world knows that the ‘Mysterious Illness’ was no more than people using unregulated black-market ingredients into their e liquid.

By this time though, the damage has already been done. Newspapers and media outlets have already sold their headlines of ‘vaping kills’. More allarmingly, anti-vape lobbyists have cemented the doubt and scaremongering misinformation to the general public.

Did the ‘Mysterious Vaping Illness’ hit the UK?

The mistaken belief that e-cigarettes are more harmful than smoking rapidly increased in the UK due to the ‘Mysterious vaping illness’ which US officials confirmed was caused by Vitamin E acetate. Vitamin E acetate is a thickening agent added to cannabis vaping products, which is banned from UK-regulated nicotine vaping products. So the ‘illness’ never hit the UK at all. Nevertheless, the damage to perception has already been done.

The report identifies the need for continuous monitoring of public perceptions as research is showing that smokers are been deterred from vaping and continuing with the momentously dangerous and often life-threatening choice of smoking traditional tobacco.

This damage in perception is ultimately going to cost lives.

Further to this, the report outlines that the potential, and in-force bans, on flavoured e liquids could also deter some smokers from switching to e-cigarettes completely. This is in reference to many states in America already banning flavoured liquids and even president Trump calling for a ban without evidence of harm during the ‘mysterious vaping illness’ fiasco.

Should smokers be advised to switch to vaping in the UK?

The report states that smokers should continue to be encouraged to try regulated vaping products. This is along with other stop smoking aids and behavioural support. This is to increase the likelihood of successfully quitting smoking for good.

A key point in the report is the evidence backed advice regarding vaping whilst pregnant. The researchers reviewed all available literature from professional health bodies and found that whilst more research is needed on the safety and effectiveness of using e-cigarettes during pregnancy, the current advise still stands.

“Smoking or exposure to second-hand smoke during pregnancy is responsible for an increased rate of stillbirths, complications during labour, premature birth, miscarriages, birth defects and Sudden Infant Death Syndrome (SIDS). Based on the latest evidence, e-cigarettes are significantly less harmful than cigarettes and  are an effective aid for quitting. However, it is important to use UK e-liquids which have been regulated by the MHRA and never home-made or illicit vaping substances.” – Smokefree Action

The advice then goes on to say

“While licensed nicotine replacement (NRT) products are the recommended option, if a pregnant woman chooses to use an e-cigarette to help her quit smoking and stay smokefree, she should be supported to do so.”

“If you feel able to stop vaping or to switch to NRT without going back to smoking then you could try to do so. However, if you think stopping vaping is likely to cause you to relapse into smoking, you should continue to vape.”

If you, or someone you know would like more information on smoking whilst pregnant, we would advise to reach out to Smoke Free Action.

“It is concerning to see how much the US lung disease outbreak has affected smokers’ views on e-cigarettes here in the UK. Safety fears may well be deterring many smokers from switching, leaving them on a path to years of ill health and an early death due to their smoking. The US authorities have now confirmed that vitamin E acetate, a thickening agent added to cannabis vaping liquid, was a primary cause of the US outbreak. This substance is banned in UK-regulated nicotine vaping products.”

“E-cigarettes are far less harmful than smoking, which causes 220 premature deaths a day in England. Our advice remains that for anyone who smokes tobacco, the most important thing is to stop smoking altogether and e-cigarettes can be an effective way to help smokers do that.”

“It is currently very hard for smokers to make sense of the many contradictory reports on the impacts of vaping and smoking. In our review we present evidence that suggests in England, vaping has not undermined declines in adult smoking, and for youth, vaping is mainly concentrated in those who were already dabbling in cigarette smoking. However, we need to remain vigilant and ensure that vaping products, alongside regular cigarettes, are not easily accessible to young people.”

“Vaping has helped many thousands of smokers quit to date. But many thousands more could benefit if they were not put off by the persistent, worsening and inaccurate beliefs the public hold about vaping. Smokers should be reassured by today’s authoritative and detailed report which shows that the UK’s e-cigarette regulations are effective and vaping remains a safer alternative to smoking. I urge smokers to have confidence in our regulatory system and not be put off by alarmist headlines about the risk of vaping which are not backed up by the evidence.”

Is vaping more dangerous than smoking?

We can see from historic evidence, reports, and independent research that vaping is much, much safer than smoking. Vaping is even encouraged for pregnant women if they cannot stop smoking altogether.

Vapoholic, as a part of the vaping industry welcomes this fresh report and the acknowledgement of how dangerous media organisations are actively harming people’s health by spreading misconceptions surrounding vaping.

Categories: News
Dale Burden-Tepper administrator
Prev post
CBD is no doubt one of the most talked about products on the market these days but not
Read More 0
“The great vape debate” – Here we go again. “The US is cracking down on vaping while the
Read More 0
E liquid too thick? Too thin? Or separating? There are two main ingredients in e liquid; vegetable glycerine
Read More 0
First and foremost, I would like to wish you and your family Merry Christmas and a happy New
Read More 0
How to steep e juice? Steeping e juice is a technique to ‘enhance’ the flavour profiles of e
Read More 0
How to store e liquid Do you know how to store e liquid? Where is your e liquid
Read More 0
Can’t taste e liquid anymore? Or does it have a bad taste? Can’t taste e liquid anymore? This
Read More 0
Cheap E liquid – What’s the cost? Cheap e liquid is one of the most searched phrases on
Read More 0
There are an estimated 3 million vapers in the United Kingdom with 0 deaths or reported vaping illnesses.
Read More 02
The days are getting shorter, the cold weather is coming in, and for some reason there are Christmas
Read More 0