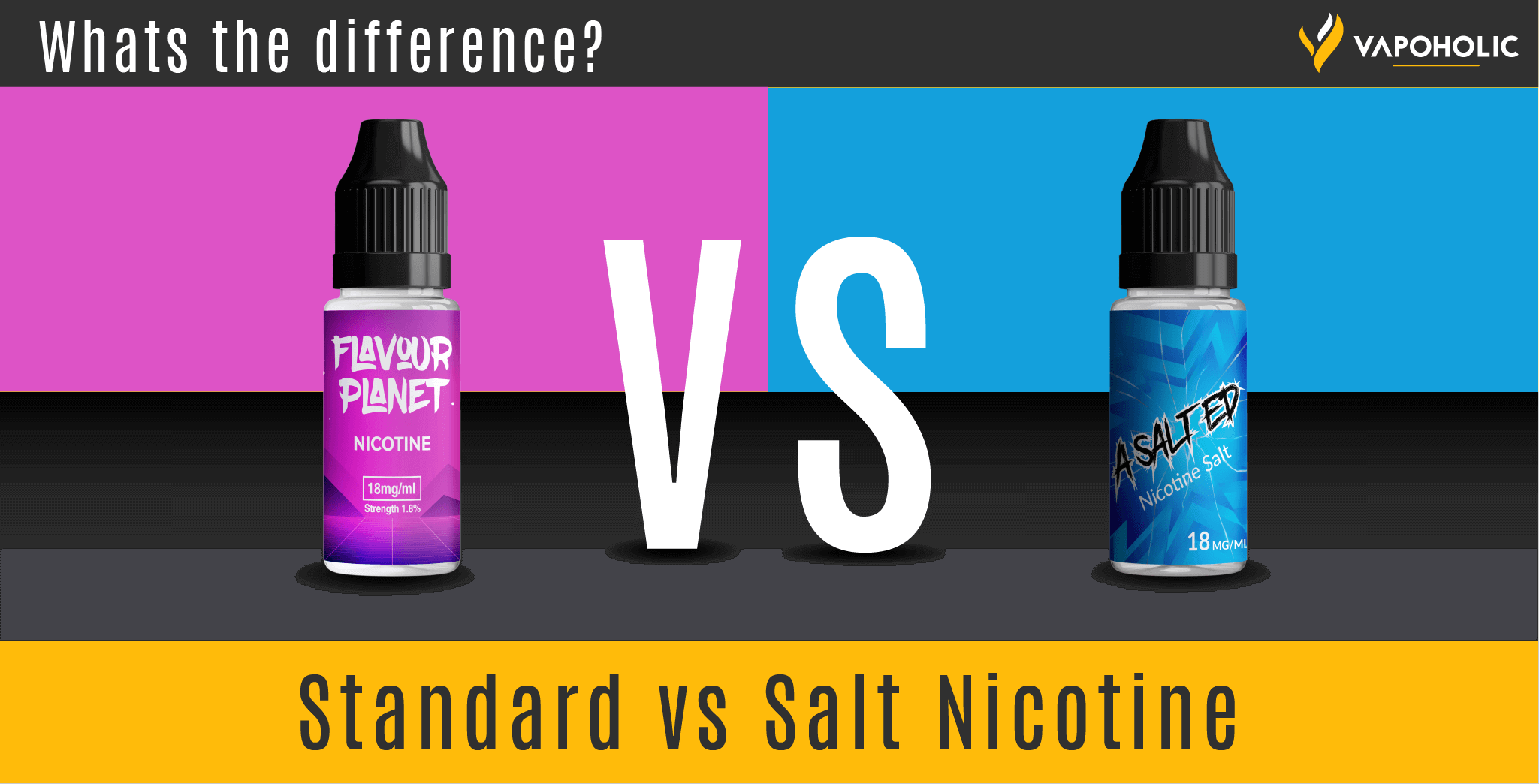 Confused about the differences between freebase nicotine and its newer alternative, nicotine salt?

What is nicotine salt? How is it made? Is it safe? Is it better than freebase?

In this post, we’ll answer these questions and compare nicotine salt vs freebase so you can choose the one best suited to you.

What is nicotine salt?

The first thing to clear up is that both nicotine salt and freebase are clear, flavourless liquids; there is no ‘salt’ or crystals in nicotine salt. It simply gets it name from how it’s produced: nicotine is a base and it’s combined with benzoic acid: acid + base = salt. However, salt and freebase nicotine provide very different vaping experiences.

Freebase nicotine, which is the standard you will find in e-liquids in the UK, is the purest form of nicotine. It is an alkali extracted directly from the tobacco leaf and is the type of nicotine found in cigarettes. It is now not only used in vape liquids but also other nicotine replacement therapies such as patches and gum.

Nicotine salt is simply freebase nicotine which has been combined with benzoic acid.

So, if freebase is the purest form of nicotine, why bother with nicotine salt? Well, the addition of benzoic acid reduces the pH of the freebase nicotine which results in a smoother vape. This means that the harsher throat hit of freebase is reduced and in turn makes it easier to vape higher strengths of nicotine.

On top of this, salts are absorbed quicker into the bloodstream and the reduction in pH allows e-liquids with a higher nicotine content to be used in lower wattage devices with little or no flavour impact.

All are very useful properties for those looking to quit smoking with vaping in particular.

ASH (Action on Smoking and Health) estimates that there are around 3.2 million vapers in the UK. Of that number, 40% are smokers who are trying to quit. Transitioning from smoking to vaping is undoubtably a smart health move but some may find the nicotine hit when vaping doesn’t pack the same punch as they are used to from tobacco. This could cause them to either resort back to smoking or continue smoking while vaping. Both of which aren’t recommended.

This is where nicotine salt comes into its own. Because salts start to be absorbed in just 15-20 seconds, they simulate a feeling much closer to that of a conventional cigarette. This means that smokers trying to quit through vaping would find it an easier transition when using salts.

On the other hand, those who have never smoked tobacco may be a little overwhelmed by the nicotine rush. In this case, freebase nicotine may be more comfortable as it is absorbed more gradually (unless the throat hit is a little too harsh for them). The following graph illustrates the different absorption rates compared to smoking cigarettes.

This doesn’t mean freebase nicotine is not useful for people who are trying to quit smoking. Some ex-smokers may not feel the need for fast nicotine absorption, but would prefer to replicate the stronger throat hit of cigarettes. In which case, freebase would be a good choice for them.

Is nicotine salt safe? Can you put it in tanks?

On the health side, there is no great difference in health impact between nicotine salt and freebase according to current evidence. Neither are a cancer-causing chemical and are relatively harmless, but both are addictive. However, as vaping is considered by, among others, the NHS to be a safer alternative to smoking, nicotine salts can help smokers make the transition easier and not resort back to tobacco due to the faster nicotine absorption.

With regard to safety of its use in vape kits, a lot of people ask whether you can put nicotine salt e-liquids in a tank. Well, the answer is yes BUT a nic salt strength of over 6mg is not recommend for high-powered sub ohm devices. This is because the nicotine hit would be too great (a rule of thumb is that as the ohms come down so does the nicotine strength you should vape). Shortfill e-liquids with nic salt shots up to 6mg would be fine to use in high-powered sub ohm kits though.

The best devices for nicotine salt strengths over 6mg are lower wattage (under 20W) with high ohm coils (around 1.2-1.5ohm) such as the Innokin Endura T18E. That is fine for those who are using vaping to quit smoking and are more interested in the nicotine hit than the large volumes of vapour produced by sub ohm tanks.

Nicotine salt vs freebase – which one is better?

Nicotine salt vs freebase isn’t a question as to which one is better. Whether you favour one or the other is purely based on your own preference, needs and the kit you use.

If you are trying to quit smoking and are using a low wattage, high ohm device, then salts would be ideal. You can choose higher nicotine strengths and the quicker nicotine absorption rate and smoother hit of nic salts would likely suit you better.

Salts can also be preferable for people who have never smoked because of the reduced throat hit. But the faster nicotine absorption may not suit them.

For those who don’t mind the throat hit (or perhaps prefer it over quick nicotine absorption), have vaped for a while after quitting smoking or simply vape for their own pleasure, then freebase nicotine would be a better choice.

For those looking to use nic salts in high-powered sub ohm devices, stick to shortfill e-liquids with nic salt shot strengths of 6mg or less. Otherwise, choose freebase.

Do you have a preference between nicotine salt and freebase? What is your experience of each? Let the community know in the comments below.