Popcorn Lung and Vaping – Are You at Risk?

/ News / Popcorn Lung and Vaping – Are You at Risk?

You may have heard talk that vaping causes popcorn lung, but what is it and are you at risk if you vape? In this post, we give you everything you need to know.

What is popcorn lung?

Popcorn lung is the nickname for bronchiolitis obliterans. It is a very rare but serious and irreversible lung condition where the tiny air passages become irritated and inflamed leading to scarring and the thickening and narrowing of the airways.

The symptoms, which include shortness of breath, coughing and wheezing, are similar to those of chronic obstructive pulmonary disease (COPD). In serious cases, the only treatment may be a lung transplant. 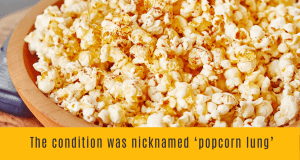 What has popcorn got to do with it?

The condition was nicknamed ‘popcorn lung’ after a cluster of workers in a microwave popcorn factory were found to have a higher incidence of bronchiolitis obliterans than the norm in the early 2000s. A possible link was discovered between an additive named diacetyl, which gives butter-flavoured microwave popcorn its buttery taste, and popcorn lung.

It was found that, while considered safe as a food additive, breathing in diacetyl could be a contributing factor of popcorn lung. Many popcorn manufacturers have since stopped using diacetyl as a butter flavouring ingredient in their products.

That said, more research on whether there is a firm link between inhaling diacetyl and popcorn lung (and at what concentrations damage might occur) needs to be conducted.

Is diacetyl the only substance that can cause popcorn lung when breathed in?

Even though breathing in diacetyl is linked to the factory workers developing popcorn lung, the condition can also be caused by breathing in, among other substances, metal oxide fumes (for instance through welding), and formaldehyde (used as an embalming agent).

While these substances are banned in TPD compliant e-liquid (see below), cigarette smoke does contain metals such as cadmium, chromium, and nickel as well as diacetyl and formaldehyde. As such, if there was anyone at risk of popcorn lung, it would actually be cigarette smokers. But even smoking is not a major risk factor as stated by Public Health England:

“Diacetyl is banned as an ingredient from e-cigarettes and e-liquids in the UK. It had been detected in some e-liquid flavourings in the past, but at levels hundreds of times lower than in cigarette smoke. Even at these levels, smoking is not a major risk factor for this rare disease.”

Does vaping cause popcorn lung?

The simple answer is no. According to Cancer Research UK:

“There’s no good evidence that e-cigarettes could cause the lung condition called popcorn lung. There’s been no cases of popcorn lung reported in people who use e-cigarettes.”

This is especially true if you purchase e-liquids that are free from diacetyl. The EU’s Tobacco Products Directive banned the use of diacetyl in e-liquids in 2016 along with a whole host of other substances, including pentane 2,3 dione, formaldehyde and metals, such as cadmium, chromium, iron, lead, mercury and nickel. The full list of TPD banned ingredients for e-liquids can be found here.

On top of the fact that popcorn lung is a rare condition in itself and that the link between breathing in diacetyl is not clear, if you purchase UK-made TPD compliant vape juice, you can ensure you are removing yourself from any risk because it will be free from diacetyl and other potential causes of the lung disease.

Both the NHS and Cancer Research UK condone vaping as a safer alternative to smoking cigarettes, and also a means to stop smoking. See our post on Quitting Smoking With Vaping to learn more about how vaping has helped many thousands of people in the UK quit cigarettes.

Do you have any more questions about popcorn lung and vaping? Feel free to ask us in the comments below.