How to Discourage Teen Vaping?

/ News / How to Discourage Teen Vaping?

Though vaping is encouraged by a number of official bodies, including Cancer Research UK and the NHS, as a safer alternative to smoking or quitting aid, we still need to ensure only those over 18 years old are accessing the products and vaping. So, in this post we will look at how to discourage teen vaping.

There seems to be several sensationalist articles floating about citing dubious teen vaping facts and presenting some kind of “teen vaping epidemic” – this should actually be called a “mis-information epidemic”! As we highlighted in our post, “Are Sweet E Liquids Encouraging Children to Vape?”, the ASH 2018 survey showed only a slight increase in UK 11-18-year-olds who had tried e-cigarettes from 2013 to 2018. Regular e-cigarette use continued to be rare at just 2% of respondents and that group consists mainly of current or ex-tobacco smokers.

We also must factor in that, according to the Office of National Statistics, smoking rates in the UK for those over aged 16 are falling and the number of people quitting is increasing. As a result, some teens between 16-18 may have tried vaping as alternative to smoking or to quit altogether.

Now, while we would never say it was fine for anyone under 18 to be vaping, it’s at least a lot safer than smoking. That said, we don’t want under-18s smoking or vaping. But as vaping can’t really be discouraged on health grounds (as opposed to tobacco) what other approaches can we take?

Well, firstly, it’s against the law for under-18s to buy or use vaping products. Even without that law in place, vaping is not for teens or children. Nicotine is a highly addictive chemical, and though numerous studies have shown that vaping nicotine-containing e-liquids does not act as a gateway to smoking, it’s still not something anyone under 18 should be becoming accustomed to.

What is the government doing to discourage teen vaping?

It is understandable that the government is reluctant to actively discourage vaping in general because of the conflict it would have with, among other health authorities, the NHS, which condones vaping as a safer alternative to smoking.

The limit to government intervention is laws concerning the buying and selling of vaping products, i.e. UK retailers are banned from selling e-cigarettes and e-liquids to anyone under 18 years old. It is also illegal for adults to buy (or try to buy) e-cigarettes for anyone under 18.

However, as we all know, teenagers can usually find what they want even if they aren’t supposed to!

There are also tight restrictions on promotion and advertising of vaping products to under-18s. These go some way to shielding teens from vaping but with e-liquid shops on almost every high street in Britain as well as the Internet and social media, it’s hard to keep them from seeing and reading about vaping.

Here are some other methods that could be used to discourage teen vaping. 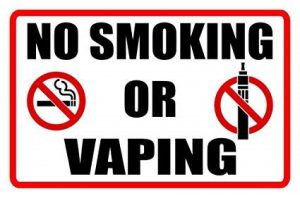 From 1st July 2007, all enclosed public places and workplaces became smoke-free in England. However, the Health and Safety Executive, the UK government authority responsible for workplace health and safety, does not enforce legislation or standards for using e-cigarettes in enclosed public places.  It is up to schools themselves to put in place a firm vape-free school grounds policy and enforce it. Public Health England has issued a guidance to schools in this regard viewable here.

Bricks and mortar retailers can easily check the age of their customers; for on-line retailers this can be trickier. Currently, the only way to ensure on-line sales are for over-18s is to have the customer consent that they are of legal age (in their country) to buy vaping products. Unfortunately, this is by no means fallible but until there are further technological advances, this is the best that can be done.

Increasing education on the dangers of nicotine addiction

Government and school initiatives to highlight to teens the dangers of smoking, alcohol and drug use are well-established and commonplace. Though vaping in general is not considered to pose a significant health risk, nicotine addiction can cause problems.

Nicotine is not a cancer-causing chemical but can cause other harmful physiological effects, including:

These are just a few of the side effects of nicotine. There are also the costs involved in keeping up the habit, and the difficulty quitting along with the unpleasant withdrawal symptoms which include agitation, anxiety and depression.

So, perhaps educating young people on the dangers of nicotine addiction would be a good angle for the government and schools (and parents) to take to discourage teen vaping, without placing it in the same category as smoking.

No easy answer on how to discourage teen vaping

Teenagers are easily led by their peers and are likely to do whatever they like however much we discourage them or set age limits. We can only do our best with shielding them from vaping products and advertising. Education would probably be the best angle to take to discourage teen vaping and we can at least rest on the fact that there is actually no “teen vaping epidemic” and in reality, relatively few teens actually do vape.

What are your thoughts on how to discourage teen vaping? Start the discussion in the comments below.

In the sea of mis-information about vaping, you should go to reputable sources for your information. Find out who you can trust with our article on Facts About Vaping – Who Can You Trust?

If you’re wondering how vaping can help you stop smoking, check out our post on Quitting Smoking With Vaping.