Quit Smoking Before 35 and Eliminate Excess Risk of Cancer

We’re all aware of just how bad smoking is for our health. As the leading cause of preventable death in the UK with almost 80,000 people a year dying from smoking-related illness, it’s no secret that quitting this life-threatening habit can work wonders for your health.

But a new study has underlined just how impactful quitting smoking can be after research revealed those who kick the habit while they’re still young can all but eliminate their excess risk of cancer.

What did the study reveal?

After 400,000 Americans were analysed, a large-scale study published by Jama Oncology found that those who manage to give up by the age of 45 reduce their chances of lung cancer by a whopping 87%. Even more promising was the revelation that those who quit by age 35 effectively erase the risk entirely.

The study is great news for those worried that smoking could permanently impact their health, as it shows the damage caused by lighting up can be completely reversed – as long as you quit early enough.

Although the findings are obviously great news for younger smokers as it proves that those who quit while they’re young have less chance of becoming unwell in later life, the research was also a cause for celebration for senior smokers too.

That’s because the study demonstrated that although the health benefits of quitting smoking diminish as we age, the chances of developing cancer and other smoking-related illnesses are still reduced even for those who quit in later life.

According to Blake Thomson, the American Cancer Society researcher who led the study, even those in their 50s and 60s “meaningfully reduced their risk of dying from cancer”. Indeed, the results showed that for those who managed to kick the habit between the ages of 45 and 54, excess risk was cut by 78%. For those who quit between 55 and 64, it dropped down to 54%.

This data just goes to show you’re never too old to quit smoking, although the biggest takeaway should be that if you want to reduce your chances of getting cancer as much as possible then you should try to quit sooner rather than later.

“If you’re a smoker in your 30s, hopefully these findings will speak to you,” Thomson said.

From the pool of people who entered the federal health survey from 1997 and 2014, around 10,000 died of lung cancer. Those who smoked were also three times more likely to die of cancer than those who had never picked up a cigarette.

As well as smoking increasing the risk of cancer, it was also noted that smokers who were being treated for the disease responded poorly to treatment compared to non-smokers. According to the report, smoking slows wound healing, which makes it harder to recover after surgery. Moreover, the side-effects from chemotherapy are also exacerbated, so smoking mounts a multi-pronged attack by first causing cancer, and then preventing the treatment of the disease.

So… what are you waiting for?

This research is eye-opening to say the least, and if there’s one thing the study highlights it’s that the time to quit smoking is now, regardless of how old you are.

For those looking to quit, let’s face it, it’s not easy. However, with the right help and an effective stop-smoking aid, we can all kick tobacco products to the curb and look forward to a brighter, healthier future.

That’s where vaping can be a massive help. Vaping has been proven to be twice as effective as other nicotine replacement therapy (NRT) products such as patches and gum, and whatsmore, a massive study carried out by Public Health England (PHE) found that while not completely risk-free, vaping is at least 95% safer than smoking.

So if this latest research has given you the urge to quit smoking once and for all and you’re considering giving vaping a try to help you succeed, check out our Getting Started guide that should provide all the info a beginner could need.

For the latest information regarding your health and vaping, head over to our Vaping Health Facts guide.

In search of the ideal device to help ease the transition from smoking to vaping?

If so, industry-leading manufacturer Innokin has recently released another excellent starter kit that was designed with this purpose in mind. Engineered for smokers and loved by vapers, the Innokin T18-X is the perfect starter kit for those making the big switch! 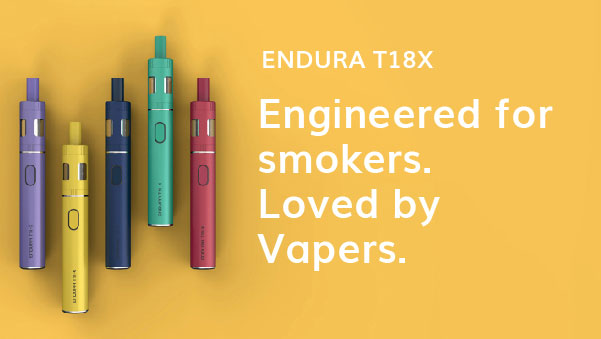